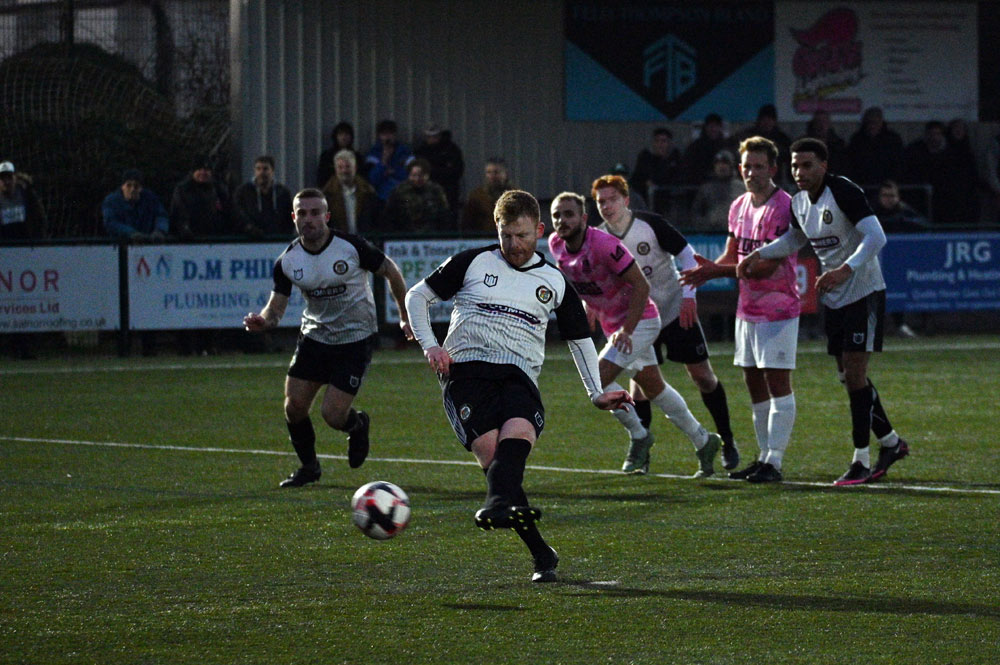 Having picked up one point in five games going into this, Alton would have probably taken a point at 3 o’clock, especially off the back of Farnham’s impressive win at high-flying Abbey Rangers last week. Come 5 o’clock, however, Farnham should have considered themselves lucky to be taking anything, having been outplayed for large parts of the game and being the beneficiaries of a scandalous refereeing decision. To make such a big statement feels harsh on someone doing a job few of us would fancy, but this one was a shocker.

With Anstey Park’s synthetic surface being only one of two playable pitches in the division – the other being in the Channel Islands – a healthy number of neutrals swelled in to make a record attendance of 590, and they saw game well worth its entrance fee, only six quid at the top end of the scale. Two goals, two penalties, one missed, one scored, neither counted.

Thirty seconds in and Alton’s presumable early worries were vindicated, as Farnham Right Back Meaton won an early dual against Caborn and clipped a purely territorial ball into the channel, where Dryden didn’t deal with it and was lucky to see Ali drag wide of the far post. Meaton drove forward himself shortly afterwards and it led to Dean being fouled on the edge, Smith floating the free kick over the wall and seeing Mees easily get across. The opening fifteen minutes didn’t produce anything else clearcut, but Alton were struggling to get out of their half.

It was quickly clear, however, that Russell on Alton’s right was the outlet. An obvious athlete before you’d even seen him move, when he got on his bike he was electric, and to suggest that’s all he’s good for would be very unfair. The lad will surely play higher in the future. With Caborn on the other flank and almost as frightening on the move, Alton wouldn’t have been unwise to sit back and let those two play on the break between them, as the second half would later prove.

In the meantime, Alton started to release the pressure midway through the first half, as Brice met Benham’s wicked corner – of which there were several – but Ferguson tipped it over. From here until the last fifteen minutes, Alton were in charge.

Farnham’s diamond was lopsided, while McAuley frequently dropped alongside his centre-halves. Presumably the setup was a way of allowing a clear route from the comfortable ball-playing defenders, through the middle up to the lively Dean at the top of diamond and their best player Ali up top. Alas, it did not transpire like this, as the immobility in the middle left the top three isolated.

Whether Alton chose to directly counter this, I couldn’t tell you, but three different moulds of central midfielder made it very tough for Farnham to get a foothold in the middle. The diminutive Mdlalose scuttled around while his, not much if at all taller, partner Hunter seldom took more than two touches before moving the play on. Where I said before that Russell shouldn’t be pigeon-holed as a runner that can play, nor should Belham be seen as merely a battering ram. He is, but he can also play.

Farnham did have a penalty shout though, after a break down the left saw the ball arrive in the box and two or three challenges where no one wanted to follow through, and eventually Dean and his teammates around him felt he’d been clipped. Not enough in it, the referee judged, and he was probably right.

The best move happened on 27 minutes, as Russell’s neat interchange with Benham led to the former pulling back to Mdlalose, but he spooned over when he should have hit the target.

Caborn then had his first chance to put the burners on with plenty of (fake) grass in front of him as he chased a flick-on. Having earlier been matched by Meaton a few times, but also getting half a yard at others and doing nothing with it, this time he made it into the box and pulled back for Sanderson. Ferguson in the Farnham goal will have been as surprised as anyone when he only had to bend down to collect a tame side-footed effort.

McAuley caught a (stupidly taken, in fairness) free kick from a Farnham teammate and conceded one himself, swung to the back post by Belham but headed straight at Ferguson by Dryden. McAuley then played a poor ball out to the right, which was intercepted by Mdlalose and he fed Caborn, but he was let down by his heavy touch.

As aforementioned, Alton were dangerous on the break, and the opener came from a Farnham throw in Alton’s last third. The hosts won it back and Hunter opened up in the miiddle, leading to a ball into the channel for Russell. Smith never looked like nipping in and Russell glided past him before impressively standing one up to the back post, where Sanderson atoned for his poor effort earlier with a good header while he was back-pedalling.

A crunching Belham challenge in the centre circle was picked up by himself before he moved to Mdlalose, and he fizzed wide from 25 yards.

The break will have been better received by Farnham as they had chance to change things, and it’s a wonder they didn’t sooner, swapping to a 3-5-2 with Sheehan-Cozens in the far more comfortable position on the right of the three.

Things continued in a similar vein, however, as Mdlalose tied Meaton in knots at a throw-in, pulling back for Russell who put his foot through the air rather than the ball, and some ping pong led to Ferguson diving at Mdlalose’s feet before Graham lashed wide. Hunter volleyed wide of the near post after Flanighan’s poor clearance, and good play at the start of the last third in the centre led to Caborn making space from distance, but Ferguson was unmoved.

Farnham’s front two were replaced on the hour mark, a decision Ali was perhaps justifiably unhappy with. He hadn’t done much since the opening periods, but he still looked Farnham’s biggest threat. Dean, now part of the front two, would take on that mantle but blazed one over after a free kick was headed clear to him on the inside right. At the other end, two vital interceptions by Flanighan prevented Russell and then Sanderson bearing down on goal.

A spell of ten or fifteen minutes ensued that was Farnham’s best of the game, as Dean drifted out to the left and ghosted past Wright before pulling back to substitute Mbele, and his good contact from twenty yards was blocked for a corner.

Dean was very much at the forefront of this Farnham pressure, and breaking from an Alton corner he raced onto one in the right channel and whipped in a good cross, which Mees didn’t punch convincingly enough. Young had made an impact off the bench against Fleet a fortnight earlier, and did again on this occasion as he took a touch and was bundled over by Benham, who had burst a gut to recover after the set-piece. Possibly more of a coming-together than a foul, but you’d be well in the referee’s ear for your own team. Young took it himself and went for the bottom right, and although not the most powerful of efforts, Mees pulled off as good a penalty save as you are likely to see.

That was with just over ten minutes to go – before we knew there’d be thirteen minutes injury time. Farnham, to their credit, pushed on and got an equaliser which Alton will have been furious to have conceded so simply. A good corner from the left by Dean, but Flanighan arrived at the near post unmarked and headed home.

With five to go, one would be forgiven for thinking that was the end. First, Bowerman met a Russell knockdown and shot on the turn but saw it blocked; that would not be Bowerman’s last scene in this drama.

In virtually the last minute of normal time Sheehan-Cozens hauled down Bowerman on the byline from Graham’s throw and the penalty was awarded. Graham dispatched it confidently and wheeled away, but the referee had blown for a free kick.

Bowerman had very obviously encroached, but the referee deemed this worthy of a free kick rather than a retake. It appears he got confused, as if Graham were to have missed the penalty, then encroachment should indeed lead to an indirect free kick. Of course, this wasn’t the case, and Alton were apoplectic to the point that after play was resumed, Wright dissented about the decision enough to be sinbinned, leading to the massive chunk of added time.

Deep into injury time, Oragbede scampered onto a flick on and took it past one man, and it was only captain Brice who slowed him down enough for Mees to dive on it at the striker’s feet. A goal there would have led to quite the furore.

It is fortunate for the referee that this was a relatively mid-table clash; Farnham would need a stunning run of form to bridge the thirteen-point gap to the top two, while Alton are nine points clear of the bottom two and won’t be for long if they continue to play as they did here.

An indifferent January so far for Farnham with four points from three, while Alton will hope they take the positives out of the result and kick on to be able to stop looking over their shoulders for good.

Also check out Stadiums and Cities report and Mattitude's vlog.