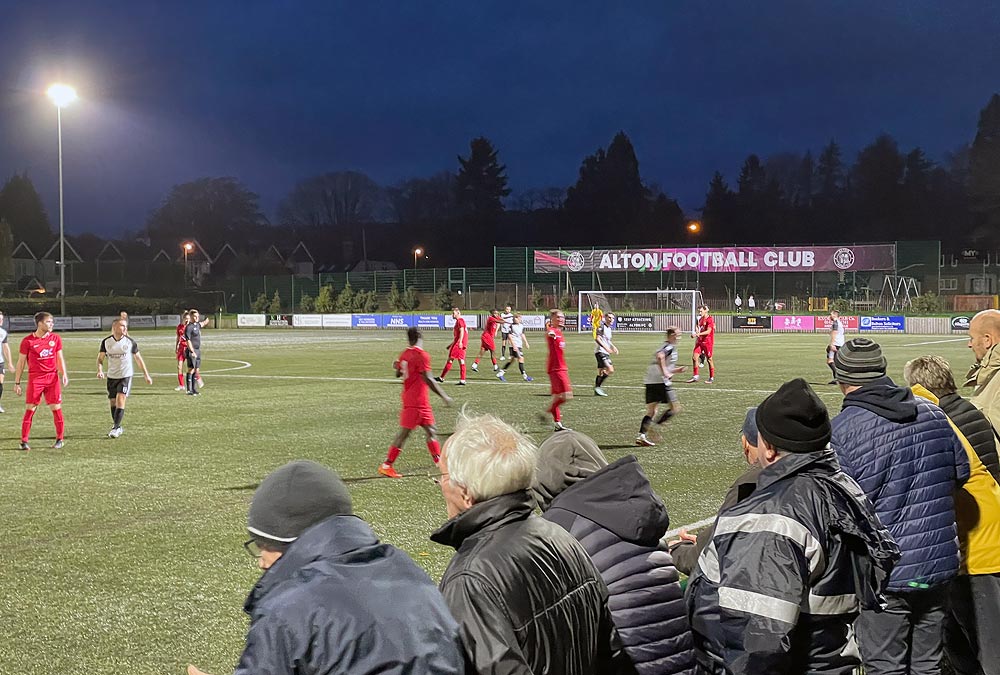 A thunderous strike from 20 yards from Trevor Caborn finally sealed the win for the home side in front of nervous crowd at The Exclusive Networks Stadium in Alton on Saturday.

A goal after just two minutes by Tommy Reffell against a Banstead team currently at the wrong end of the league probably lulled everyone in the ground into that false sense of security in a game where they might have expected to collect the 3 points.

In fact it was completely the opposite as the visitors played some really nice positive football and pushed Alton back for long periods of the first half deservedly equalising on 22 minutes.

Young Archie Larkham making his full league debut at right back nearly crowned a man of the match performance with what have been a great goal, an audacious flick around an opponent allowed him to drive at goal, ride another challenge and crash a shot off of the crossbar.

The home side were disrupted in losing both Richie Hunter and Louis Russell to injury during the first half, but should have re-taken the lead right on half time when Matt Benham delivered one of his trademark free kicks into the dangerous area that is no man's land between the keeper and the six yard box but George Bowerman could only bundle the ball fractionally wide.

The second half was a good contest. The home side dominated the ball but Banstead continued to play attractive and controlled football without seriously testing Greene in the home goal.

With the game entering the late stages the home side drove forward and when Caborn, who was a threat the entire game, was poleaxed in the penalty area by a late challenge by the keeper, there was not a single sole in the ground who was incredulous to the referees decision to allow play on and neither sanction the keeper or award a penalty.

Caborn was not to be thwarted though and to the delight of the home crowd he picked himself up dusted himself down and fired home the winner.

A frustrating day for the home side who will hope there are no long term injuries to report to Hunter and Russell.

Banstead belied their league position and were really good on the day, but on chances alone Alton deserved the three points.

Alton travel to Redhill next Saturday 3rd December and then return home to The Exclusive Networks Stadium the following Saturday 10th December for our final home game of 2022.