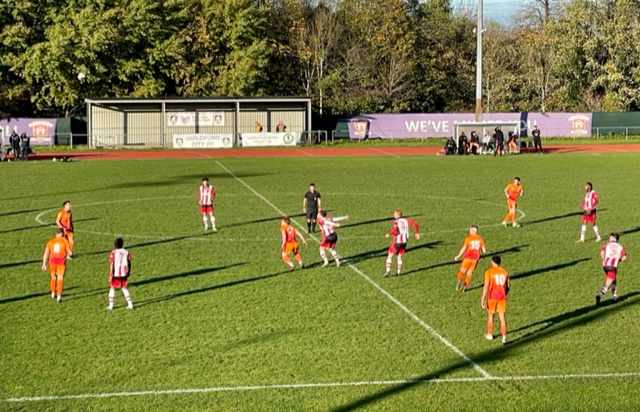 A well deserved three points for the visitors on Saturday at the Spectrum Sports Centre in Guildford.

Alton got off to the best possible start when Ed Dryden headed them in front from a corner in the 4th minute, finding himself the space in a crowded penalty area to power the ball home.

Alton were dominating territory and retaining the ball well on a surface that was to be challenging and difficult for both sets of players to predict the run of the ball and the bobble that was obvious from the touch line.

Fortunately for the visitors they were grateful for one such bobble as the ball arrived through a crowded penalty area to an unmarked Guildford player at the back post who looked certain to equalise on a rare sortie into an attacking area. Just on time the bobble intervened and Alton could breath a sigh of relief.

That let off got the right reaction from the visitors who pushed forward and got a deserved second goal on 38 minutes. Richie Hunter nicked the ball just inside the home sides half and strode forward and with everyone encouraging him to strike at goal he saw a pass to the left that we had all not seen and he slipped George Bowerman in for an easy finish.

Just on half time Bowerman was free at the back post again but he was unable to head on target and the chance to put the game out of reach was lost.

The visitors controlled the second half and were never in danger of allowing Guildford back into the game and as the game went on it became more difficult to run with the ball which stopped the flow of numerous opportunities that Alton created to break clear of the stretched home defenders.

A satisfying win in a dominant performance by Alton.

Alton are next in action at HOME this Saturday 26th when Banstead Athletic will be the visitors, 15:00 kick off. See: An Eventful, Festive and Charitable Day at Alton FC