This game had a very fast start with both sides keen to take the initiative early on. 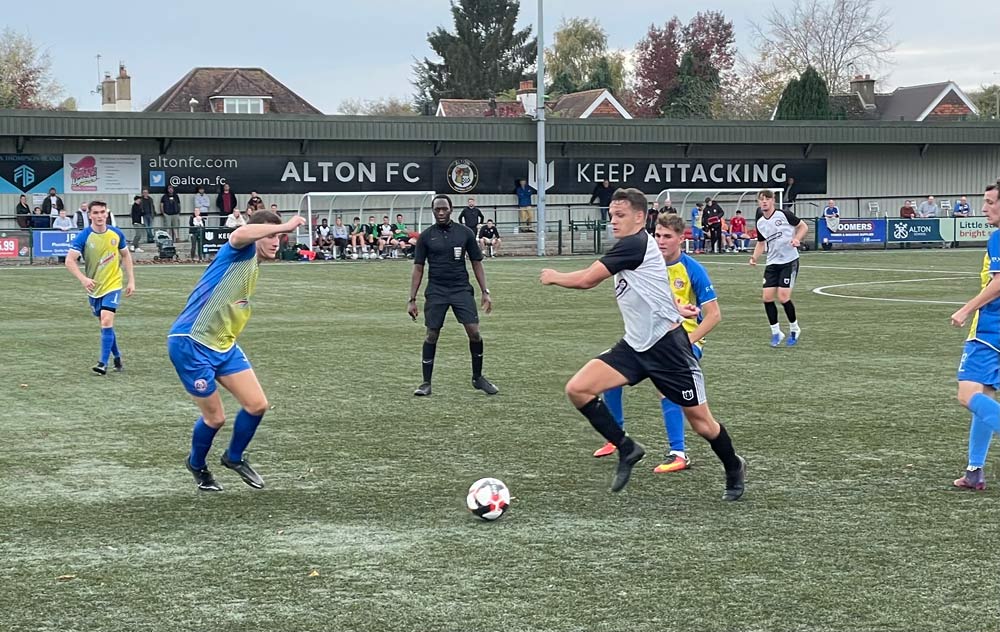 The home side should have taken the lead in the first five minutes. Louis Russell delivered a peach of a cross from the right and with the goal at his mercy George Bowerman just failed to sort his feet out and the chance was lost.

Alton continued to dominate territorially and forced a succession of corners but were unable to press home their advantage.

The Camberley central defenders were physically bigger than the smaller Alton front line but they were up for the challenge and harassed and fought them for every ball.

It was from one of those contests that the home side took the lead on 33 minutes. Siph Mdlalose won the ball and set Matt Graham free on the left, he found Matt Benham on the edge of the box and he stepped inside his marker and struck the ball into the bottom left hand corner. A lead they held for the rest of the half.

Camberley came out fighting in the second half and pushed the home side back. In one 10 minute spell Lewis Mees pulled off two outstanding saves and Matt Graham was in the right place at the right time to clear off of his own goal line.

Slowly the home side wrestled themselves back into the game and as the game entered the last 15 minutes Louis Russell was shown a straight red card after he reacted to apparently being trod on when he laid prone in the visitors penalty area. The referee and officials remained unmoved by the evidence of the stud marks that were engraved on his torso. This perceived injustice seemed to galvanise Alton and they continued to push on and settled the result on 85 minutes. A lovely break down the right was delivered across the box and the lurking Jack Fowler pounced on the hesitancy of the right full back to stride forward and strike a left footed shot beyond the keeper.

The home side were worthy of the three points in another very competitive and enjoyable contest.

Alton are at home again this Saturday 5th November when Abbey Rangers will be the visitors to The Enclosure.