Collectively this was Alton’s best performance of the season so far. 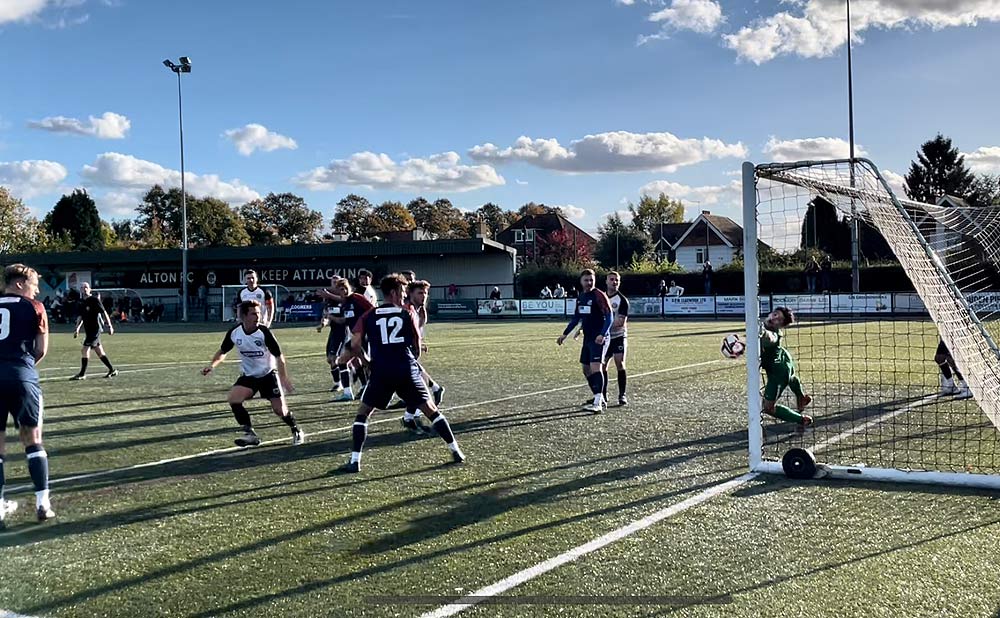 To a man they worked harder than the opposition which enabled their quality to prove the difference.

Matt Benham was making his first start of the season and he came closest early on, stepping inside onto his left foot but shooting wide.

Louis Russell created himself a crossing opportunity but Siph Mdlalose headed over.

The home side were well on top, dominating territorially and in possession and Bowerman headed straight at the keeper from Benhams free kick.

The home side took the lead on 19 minutes, Bowerman picked the ball up midway in the attacking half, attacked the retreating defending and belted an unstoppable shot home from 25 yards.

On 29 minutes a second for the home side. Adam Brice’s initial header from a corner was blocked, fell nicely back to him and he lashed the ball home.

More chances came as the half came to a close. Mdlalose pinched the ball off a defender in the box and looked to be fouled. Loud penalty appeals were waved away by the referee.

Jamie Phillips made a great run from his own half and got another shot on target and Benham cleverly beat the full back, clipped a delightful ball over the keeper but a retreating defender headed off of the line.

The home side started the second half as they ended the first. Liam Knight who replaced Benham at half time was slipped in by Mdlalose but the keeper blocked well.

Mees in the home goal was not particularly busy but everything he did was positive and confident.

The game was ended as a contest when Sanderson outmuscled his marker from a corner and side footed home.

A really positive result with some really good individual performances against a side who will definitely be very competitive in this league.

Alton will be playing a friendly at home this Tuesday 11th vs Eversley & California.