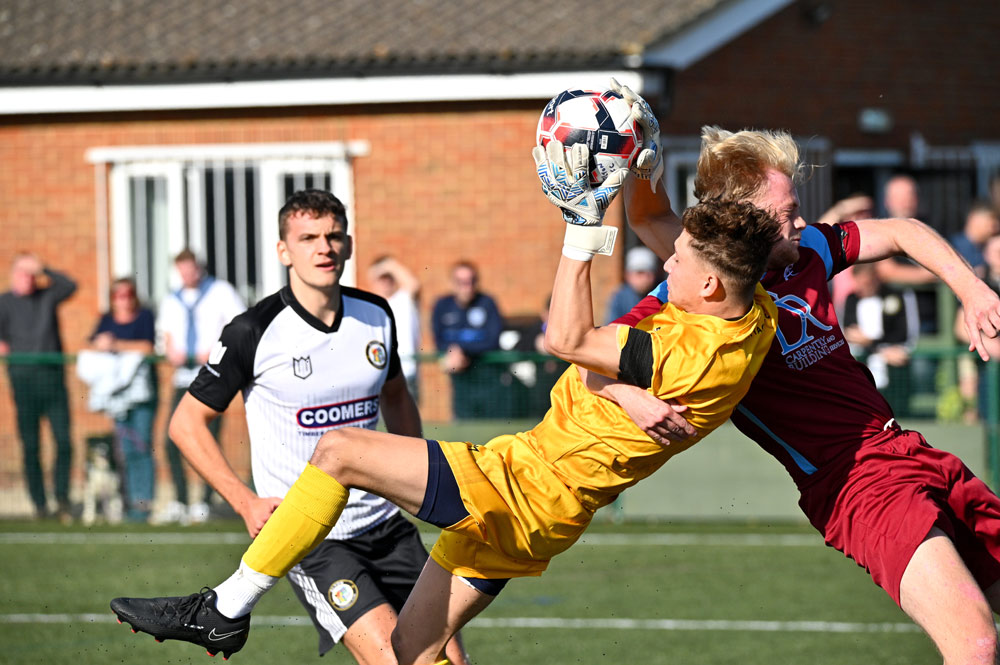 With confidence being challenged after a testing start to the new campaign it was perhaps inevitable that the first win would go to the wire leaving the decent sized home crowd biting their finger nails. The facts though were somewhat different on the day and the score line flattered the visitors.

Alton started on the front foot and a close range header from Adam Brice and a goal bound shot from Scott Sanderson well blocked by a visiting defender set the tone for the first half.

Liam Knight was a constant threat throughout the game and on another day would have scored twice as the game approached the half hour mark, turning well in the box but shooting wide of the far post and then latching onto new signing Louis Russell’s cross from the right, stepped inside the last defender but lost the the opportunity when the ball deflected off Tommy Russell who was also lurking.

The game burst into life in the last five minutes of the half when the home side were awarded two penalties in a three minute spell.

The first a little fortunate when Reffell was blocked off in the box whilst harassing a defender, but appeared to be given as Billy Wright had been booked 60 seconds earlier for exactly the same offence in the middle of the pitch. Both decisions looked harsh from the touchline.

The second penalty was nailed on as Knight was felled when he turned the full back inside out in the penalty area as was upended.

During the second half the home side should have gone on to win convincingly.

Reffell broke clear rounded the keeper and with the goal at his mercy unfortunately hit the post.

Then a third penalty for Alton, Jamie Phillips galloped forward down the left, strode into the box and very cleverley tempted a rash challenge from a back pedalling defender. Unfortunately Mdlalose spurned the chance of a hat trick from the spot when he shot over the bar.

When Brice powered a header against the far post from a corner you wondered what more the home side would have to do to secure the points.

A flashpoint in the home penalty area then resulted in a double sending off. Young Lewis Mees in the home goal was pole axed when collecting a shot he had parried up into the air with what only can be described as a particular nasty challenge by a Horley striker who led with his arm when he had no real chance of getting the ball. Oli Graham will no doubt regret his reaction to the tackle in the aftermath as he was sent of for retaliation.

On 85 minutes and having hardly threatened throughout the game suddenly the visitors were back in it, a clearance to the edge of the box was volleyed into the back of the net, a really nice finish.

How would the home side react in the circumstances?

Well they passed with flying colours spending the rest of the game and injury time in the visitors half without threat to either goal.