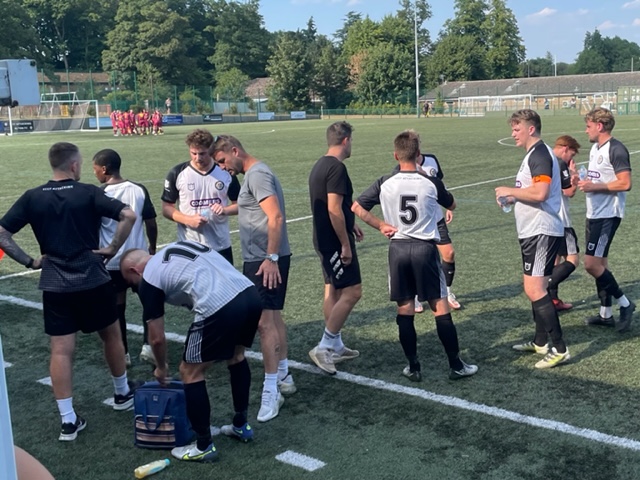 Like all other fixtures on the day the game was played in very hot humid conditions which affected the pace of the game from start to finish.

Both sides were happy for the other to have possession of the ball when not in threatening areas and neither keeper was called into action at all for most of the first half.

Out of nowhere the visitors took the lead two minutes before the break, an aimless clearance from their own penalty area landed just inside the Alton half, a slip from one defender left the striker charging in on goal, he evaded the last defender and clipped the ball into the net. Hugely frustrating right on half time.

Alton came out quickly after the break and pushed the visitors back, equalising on 53 minutes when a raised arm in the box deflected a header on goal away, penalty Alton.

With the heat taking its toll it looked like both sides might take a point, but yet again the home side were caught on the break in the 75th minute.

Alton were again on the edge of the visitors penalty and 15 seconds later it was in the back of their own net. A break down the right that was poorly defended ended with a lone striker in the box poking a shot that looked to going wide into the body of a home defender 1-2.

5 minutes later it looked like it was game over as the left sided striker stepped inside onto his right foot and curled a delightful shot in off the far post.

Encouraging signs from the home side in the last 15 minutes that they were not just going to capitulate. On 86 minutes Matt Benham rolled Rob Carr in on goal on the left hand side of the penalty area and his goal bound shot was helped into the net by a desperate defender.

With as much as 10 minutes plus still to play due to a water break and substitutions the home side tore into the visitors.

Corner after corner were won and chaos rained in the Balham penalty area, twice defenders got their bodies in the way of goalbound shots and when Tom Reffell's header clattered the crossbar they again did well to clear their lines as the ball bounced around in their 6 yard box. A frantic end to a good contest.