Alton continue to look for their first win of the season as a goal late in added on time slightly distorted the score line on Saturday afternoon. 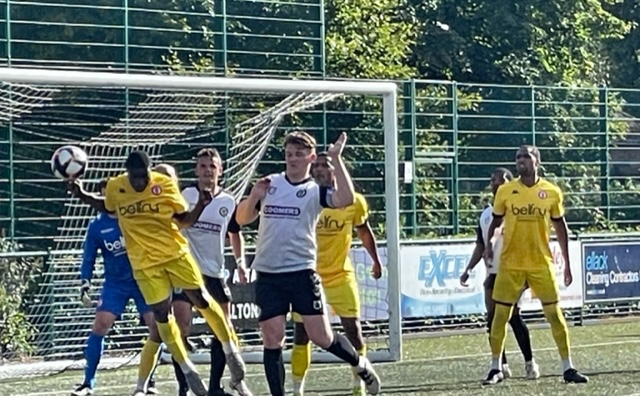 The home side were quickest out of the blocks. A back peddling Adam Brice was just unable to convert after Bowerman had hooked a ball to the back post back across goal.

Ritchie Hunter then did well to shut down a strike from the edge of the box to thwart the visitors.

Both sides were comfortable on the ball and the best chance of the half fell to the home side when after some really good one touch football just evaded a sliding Rob Carr at the far post.

On 42 minutes the deadlock was broken. Hesitancy at the back was pounced upon by a persistent striker who gleefully set a colleague for a tap in.

The second half started with the home side on top territorially but without creating a good goal scoring opportunity.

Then on the hour another error and sucker punch allowed a striker to walk the ball into an empty net.

Brice then forced an excellent point blank save from the Redhill keeper as Alton tried to claw a goal back.

It took until the 86th minute before they did that. Knight volleying home at the back post after a great cross from Hunter.

Throwing caution to the wind to try and snatch a point the home side poured forward in numbers, but then deep into injury time Redhill broke from their own box and their very impressive number 7 galloped away to finish confidently.

Redhill were good for the three points but Alton will rue the individual errors and regret continually giving themselves a mountain to climb.

Small margins that will hopefully turn for them soon.